You and Me Together

With combined interests of live music and beach life, John and Claire Noto are realizing their dreams on Topsail Island.

Thinking back to the day you met your current soul mate, it’s always fun to recall how you felt that first moment you laid eyes on that person and to remember the details of those first interactions. That is the story I was after when I sat down with John and Claire Noto from The Topsail Island Trading Company.

I met them last fall shortly after I moved here, and over time we realized we share the same music interests (when they told me the song they danced to at their wedding was “You and Me” by Dave Matthews Band, I was thrilled!). They took some time out of a work day recently to share their story with me. 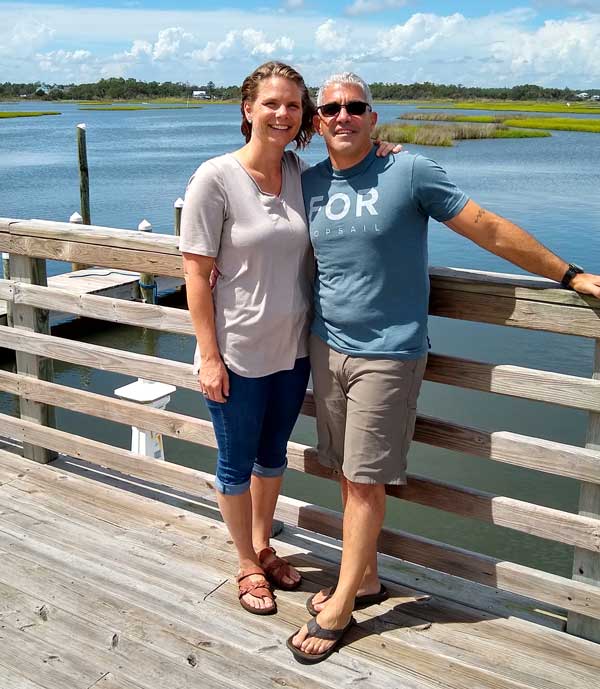 Like so many other businesses, they had just reopened due to the COVID-19 restrictions being eased. When I walked in their store and saw how busy they were, I thought to myself how fantastic it was to finally see people out shopping for something other than groceries. Not to mention enjoying the groovy tunes playing in the background in the store — the shoppers were in such a great state of mind!

With a fresh cup of coffee in hand, we sat down and traced the steps that led to their wedding day in 2009 -— and why a Dave Matthews Band song was the wedding song. John, originally from Brooklyn, New York, grew up in Sterling, Virginia. He recalls in 1993 attending a big outdoor music festival on a farm not far from Charlottesville, Virginia. “I saw the Dave Matthews Band then for the first time.” he says. “This was well before they hit the big time. But I will never forget the impression they left on me that day!”

Claire, who is originally from Midlothian, Virginia, recalls being at a pool party in 1994 and displaying a talent she had perfected as a child. “They were having a hula hoop contest and I won,” she says. “The prize was a cassette tape called Under The Table and Dreaming. I wore that Dave Matthews tape out!” 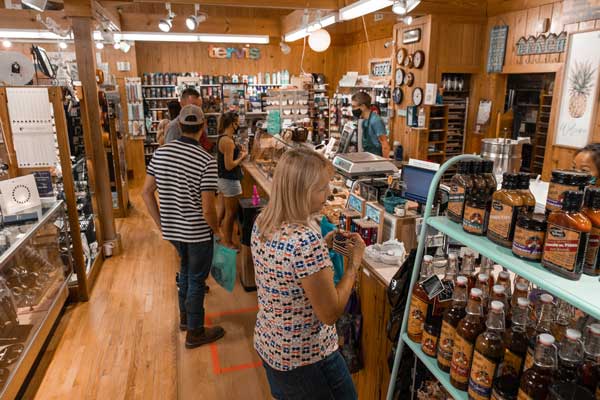 Fast forward to 2004. While attending George Mason University in Fairfax, Virginia, Claire and her college roommate were bartending at different establishments. Her roommate worked with John and decided to become matchmaker and introduced them. “I had a boyfriend at the time, but after meeting John, I broke up with him immediately!” Claire says.

Their first date was on a Bacardi Rum Cruise on the Potomac River. “A cruise like this is crazy fun,” John says. “You pay an all-inclusive fee, dress up in nice clothes and the alcohol flows nonstop!” As the boat passed the former home of George Washington, John and Claire slipped away from the wild party to the bow of the boat and had their first kiss under the moonlight.

In 2007 they began to live out the lyrics of their wedding song. They packed their bags and moved together to Topsail Beach, where Claire had visited every summer as a child. Her family loved Topsail so much her parents eventually bought two businesses on the island. In 2009 John and Claire married in their bare feet on the sand at Topsail Beach. At their reception at the Surf City Welcome Center, that they danced to the beautiful words of Dave and vowed, “Eyes closed we’re gonna spin through the stars, our arms as wide as the sky. Oh, and when the kids are old enough, we will teach them to fly.” 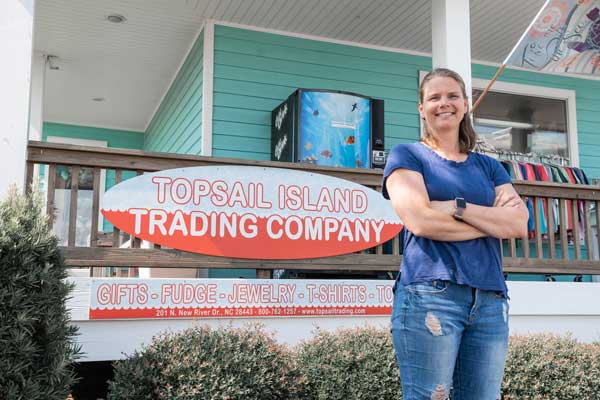 Since then, while running the family business, they have had three children together — Quinn (named after “The Mighty Quinn” by Manfred Mann), Rosalie (named after “Rosalie McFall” by the Grateful Dead) and Leona Ryder (named after “I Know You Rider” by the Grateful Dead), ages 9, 7 and 5 respectively. Through football, cheerleading, dance, softball, baseball, basketball, soccer and scouts, John and Claire are certainly busy teaching their kids to fly! In addition, John’s daughter Libby has spent every summer with them since 2007 and has just graduated from college.

With all the suddenly available time due to COVID-19 shutting schools and sports down, the family has found new hobbies. “Claire and I normally attend a half-dozen concerts a year in Raleigh or at the Greenfield Lake Amphitheatre in Wilmington,” John explains. “Now, with all our family sports and events put on hold, we decided to take up a new hobby as a family. It is called geocaching.”

I had never heard of this before, so he explained to me that geocaching is an outdoor recreation activity in which the participants use a mobile device and other navigational techniques to hide and seek small watertight containers. “Once you hide a container, you enter the coordinates on the website or app,” he explains. “There are millions of these hidden around the world. Many of them contain a logbook that you enter your code name and the date you found it and then simply put it back exactly where you found it. Other larger containers have items for trading such as trinkets. This is a hobby that kids and adults of all ages can get excited about participating in whether you stay local or travel the world looking for these ‘caches’.”

As we wrapped up our conversation, I mentioned that the Dave Matthews Band concert in Raleigh had been rescheduled for Friday, July 23, 2021. And how much I hate having to wait another whole year to see them. But then again, I said, it will give us something to really look forward to. When we can all be together again, you and I, to make those memories that last forever!

The Notos can be found at their store, Topsail Island Trading Company in Surf City. The gift and souvenir shop sells home decor, jewelry, games, puzzles and fun trinkets galore. Everyone loves their selection of homemade fudge.