Topsail Beach Skating Rink has been a family-friendly tradition for more than 55 years.

The Topsail Beach Skating Rink has been around since The Beatles’ “I Want to Hold Your Hand” sat at the top of the Billboard charts. That was 1964, and the skating rink surely played that hit on vinyl as skaters made their rounds on the old maple floor.

With more than 55 years of history, the roller-skating rink still operates on the second floor above the town’s post office as a landmark/time capsule. Dan Arnold runs it with his aunt, Doris Jenkins, who originally opened the skating rink in 1964 and would work there every night after her day shift as postmaster. Now, Arnold carries on this same tradition. Jenkins turned 83 in May. 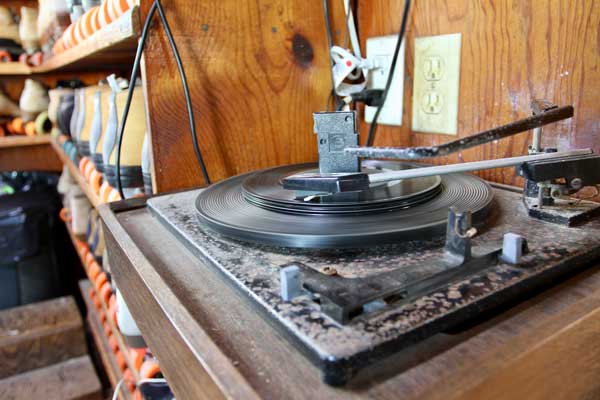 “This summer, she’s feeling real good and she skated on her birthday,” says Arnold over the phone during his shift at the post office. “But if there’s too many people in there, she won’t … She’s still mighty graceful when she skates.”

Arnold says that not much has changed over the years, including the lack of air conditioning inside the building. But that hasn’t impacted the draw, proven by the full house each night.

“We’ve never had air conditioning,” Arnold says. “We just open the windows and turn on the fans, but it’s not miserably hot in there like it used to be because we got a new roof and new insulation.”
Something else that hasn’t changed, he says, is the family-friendly atmosphere amidst nostalgic surroundings.

“It’s always catered to the tourist families,” Arnold says. “They bring their kids in and learn how to skate, go back home and continue to love to skate somewhere else and then come back the next summer. … And then that kid brings in their kids, and then they’re bringing their grandkids.”

The skate music is still played on old 45s, as well as a new digital sound system Arnold installed, in a variety of genres, from 1950s classics through today’s hits – even classical music, which is what Jenkins prefers. Skaters glide hand-in-hand for the ballads and faster for the pop songs with pep under the old disco ball that was hung so long ago, plus some LED lights that Arnold added to shine off that ball for the “younger crowd,” he says. 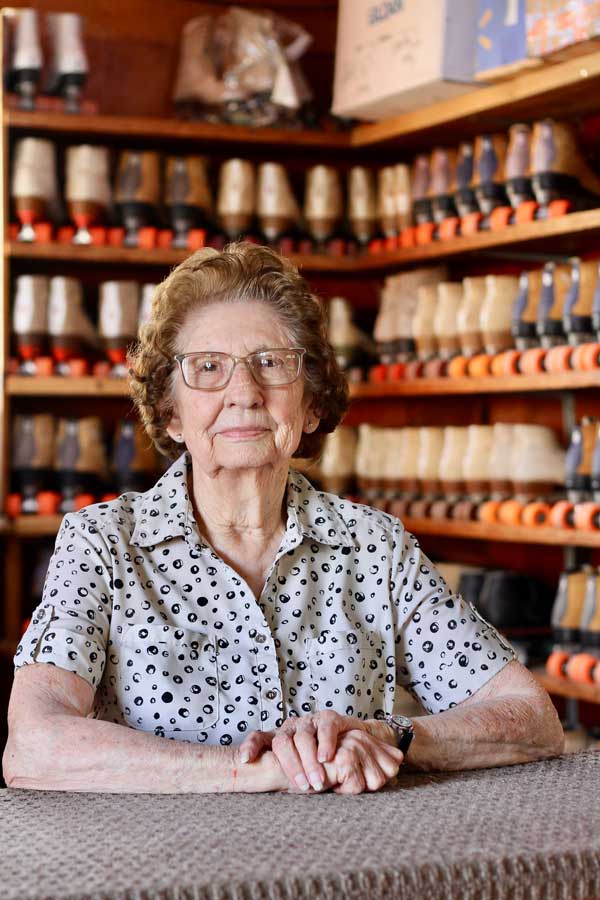 But Arnold doesn’t want to erase the skating rink’s sacred past. He started hanging up some of the old outdoor signs on the inside; a new sign now hangs out on the front of the building at the top of the steps leading up to the second-floor rink.

“I’ve hung them up on the inside to kind of just remember what it was like in the past and what used to be,” he says. “The original exterior sign is long gone, but the second sign that ranged the middle 1970s through the middle ’80s, I found it during Hurricane Florence and cleaned it up, clear-coated it and hung it on the wall. Same for the one from the mid 1980s up to 2018.”

Arnold says he has also recently spiffed up the place by hanging United States military flags and state flags from the rafters above – the farthest one from California.

“People from all over the country are sending in their flag, and we’re hanging them up,” he says. “So, it’s looking real good and colorful.”

In addition to the music, fun and ambiance, the Topsail Beach Skating Rink sells bags of potato chips, bottled water, Gatorade and soda. On top of that, expect a nightly game of Elimination on the skating rink, a tradition here since 1964.

“What I would really love to see, and it’s something I’ve never really understood,” Arnold says, “is that I wish we had a little bit of local support like we did back in the ’80s, when I was a teenager. There always seemed to be a decent group of kids locally that came to skate three or four times a week. 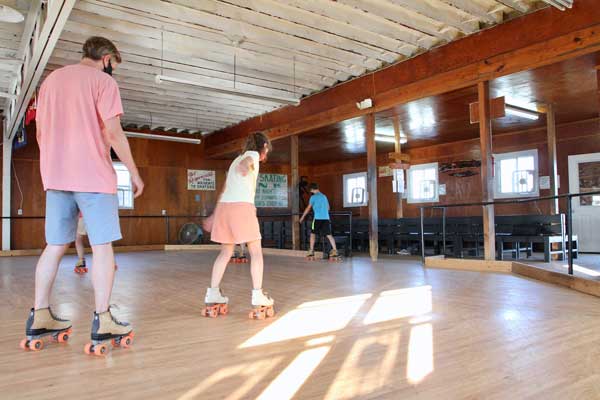 We get a few local families, but if we had to rely on local business, we wouldn’t make it.”

He adds that he realizes locals may rather want to travel to the fancier rinks in Wilmington, but you can’t beat the $8 admission at the Topsail Beach rink, which includes skate rental. The nostalgia is free.

“After Labor Day weekend, in years past, they always just shut down because they just never got any local support,” Arnold says, “but since I’ve come along in the off-season, we all tend to take a week or two off after Labor Day and then we’ll open up two or three days during the week.”

Arnold also added an extra hour to the daily schedule because of the crowds. Hours used to be from 7 to 10 pm, but now they open at 6 pm.

“I advertise that the first hour is for beginners only, and then we get an early crowd before dinner and an after-dinner crowd,” he says. “So, it kind of breaks up the traffic a little bit.”

Topsail Beach Skating Rink is a throwback to simpler times, and it suits the atmosphere of this small, family-friendly beach town so well. Don’t miss a chance to lace up some skates and take a few turns around the rink. 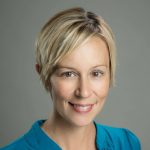